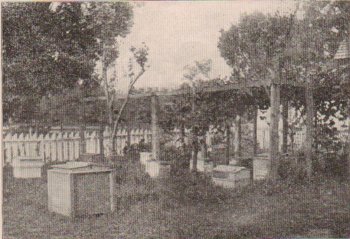 APICULTURE
Simeon G. Kilgore Has finest in This Section of the State

Beekeeping is one of the agriculture pursuits, but by no means the least of them, as it is carried on in every state in the Union and the honey and wax consumption runs into the millions of pounds annually.

Herewith is shown a picture of a "corner in the apiary" of Simeon G. KILGORE, who has 50 colonies of bees at his bee culture farm, 3½ miles west of London.

He has kept bees some 16 years and produces only fancy honey in the comb and gets a crop of this luxury nearly every season, although the last two years were entire failures over the country for honey. His fancy honey sells to home trade at 17 to 20 cents per lb. also the wax which is pure and put up in 1 ounce cartons nicely labeled for market and finds a ready sale. Mr. K. buys pure Italian queens from the South and mates them to common native drones, producing a hybrid, which he thinks makes the best workers. He also buys and sells bee supplies to his neighbors and frined.